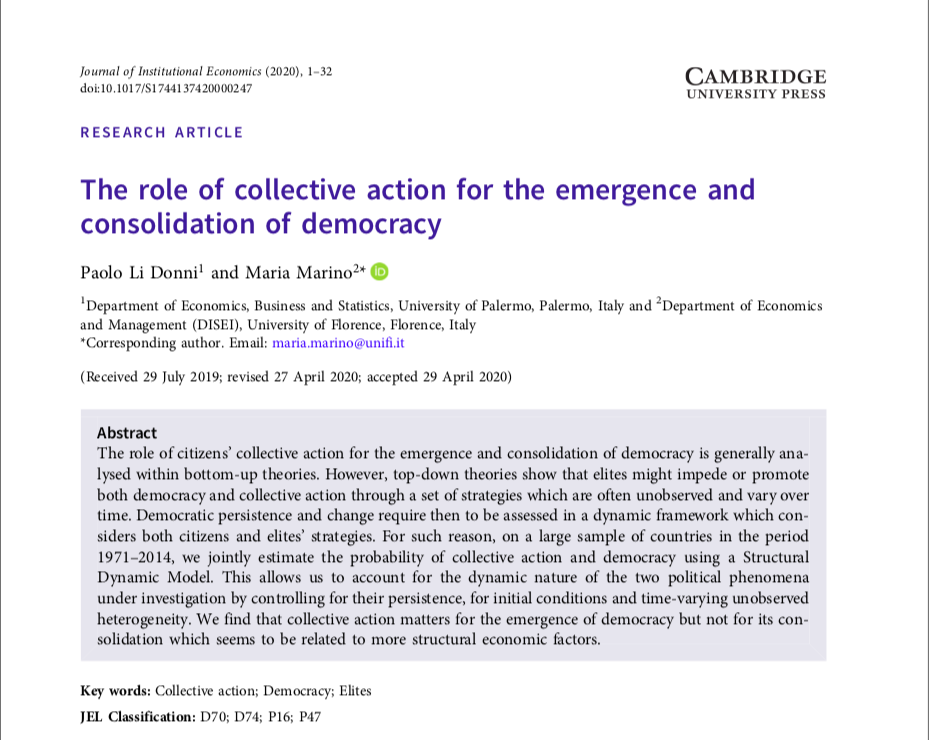 Summary of JOIE article (First View, 16 June 2020) by Paolo Li Donni, University of Palermo and Maria Marino, University of Florence. The complete article is available on the JOIE website

Several scholars have claimed that democracy is a powerful predictor of countries’ prosperity (e.g., Alfonso-Gil et al., 2014; Acemoglu et al., 2019). The debate about the topic has resurfaced the question of how democracy emerges and consolidates (Acemoglu and Robinson, 2005).  On the one hand, some scholars claim that when citizens achieve solving their collective action problem, they might force the elites to democratize (Acemoglu and Robinson, 2005; Boix, 2003; Teorell, 2010; Aidt and Franck, 2015).  On the other hand, top-down approaches claim that the elites is the most influential agent of democratic change (e.g., O’Donnell and Schmitter 1986; Lizzeri and Persico, 2004).

In our paper, we argue that the dichotomy between top-down and bottom-up theories is misleading because elites and citizens interact strategically. For instance, pro-democracy elites may help citizens solve their collective action problem by threatening a revolution against the pro-autocracy elites (e.g., O’Donnell and Schmitter 1986). Nevertheless, the bottom-up and top-down theories of democratic change have rarely been tested simultaneously. A possible explanation is that elites’ strategies are often unobservable and change over time. We argue then that the debate on how democracy emerges and consolidates can be revived by taking into account both the bottom-up and top-down theories and by dealing with the problems related to unobserved heterogeneity in a dynamic framework.

To address the above problems, and based on Marino et al. (2020), the paper offers an empirical strategy, which jointly models the probability of citizens to engage in some form of collective action and the probability of elites to democratize and consolidate the democratic system. Moreover, unobservable factors are controlled for by using a latent variable following a first-order Markov chain which allows to decompose countries’ unobserved heterogeneity in a discrete number of states which depend on the previous period and are allowed to change over time. This gives the opportunity to disentangle persistence, change and dependence on initial conditions.

We apply the model to 170 countries from 1971 to 2014 and our results find the role of citizens’ collective action important for the emergence of democracy but not its consolidation. The latter seems to be favored by structural conditions like the level of economic development and threatened by economic crises.

We also find that collective action is a very persistent state, indicating that once citizens learn how to solve the collective action problem, they are more likely to solve it again in subsequent periods. To the contrary, democratic persistence seems to be very sensitive to which type of democracy indicator is used.

Finally, we find two latent classes pointing to the presence of unobserved heterogeneity in the interaction between citizens and elites. In particular, in our context, assuming that unobservable factors refer to elites’ strategies, the first latent state (with a lower propensity toward collective action) could be associated with democratic transitions achieved through elites’ institutional reforms induced by the anticipation of perceived collective actions; the second latent state (with a higher propensity toward collective action) could be associated to transitions where much disagreement exists among elites who have a greater incentive to sustain citizens’ efforts towards collective action

Despite the potential advantage of our approach, it suffers from some limitations which however can further stimulate the empirical research on the topic. For instance, we interpret unobserved heterogeneity in terms of elites but latent variables may capture other unobserved factors. Although this does not undermine the main result of our work – the role of collective action on the emergence of democracy – it calls also for the need to have some measure proxy-ing the elites’ role in the democratization process.

Finally, we assume a first-order Markov chain in the description of the dynamics of the latent process but there is the possibility that higher order Markov chains are needed because democracy and collective action can be also interpreted as long-term memory processes related not only to the previous period but to older transition histories