A multi-disciplinary forum for research on economic institutions

and in Current Contents® Social and Behavioral Sciences

Publication in JOIE can bring huge visibility for your work. JOIE is widely available in its electronic version and many articles have already had high numbers of full text downloads. Subscriptions to the journal and full-text downloads are increasing rapidly and globally.

The hard copy circulation of the journal is higher than that of some well-known and long-established journals.

The Elinor Ostrom Prize of £1000 is awarded to the best article in JOIE in each calendar year.

The 2017 citation impact factor for JOIE in the Clarivate Analytics (formerly Thompson-Reuters) Social Sciences Citation Index® was 2.139 – its highest-ever level.

For comparisons of the JOIE citation impact with that for other journals click HERE.

The current Clarivate Analytics impact factor is 1.827. According to SJR, the journal features in the top quartile of economics journals. 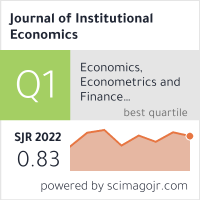 A Fast and Efficient Reviewing Process

36% of submissions received so far were rejected by the editors without being sent out to referees.

33% of submissions received so far were rejected by the editors (in an original or revised form) after being sent out to referees.

23% of submissions received so far have been accepted by the editors in an original or revised form.

JOIE has served authors by providing a rapid decision in almost all cases. Unlike some other prestigious journals, you will not wait many months for a decision (unless we have exceptional difficulty finding suitable referees).