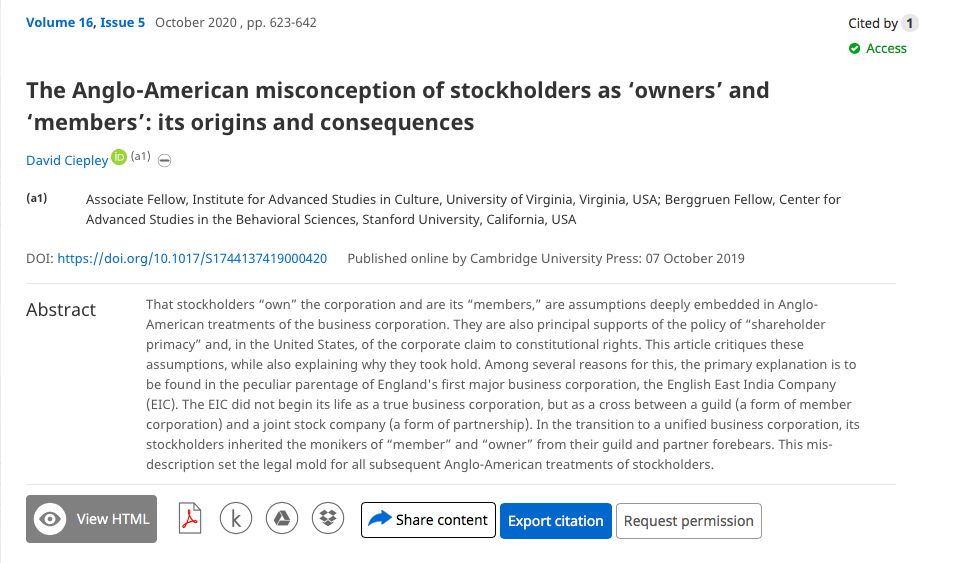 Summary of JOIE article (First View, 07 October 2019) by David Ciepley, Associate Fellow, Institute for Advanced Studies in Culture, University of Virginia, Virginia. This article appeared in the Symposium on Corporations edited by David Gindis. The complete article is available on the JOIE website.

This article critiques the notions, deeply rooted in Anglo-American treatments of the business corporation, that stockholders ‘own’ the corporation and are its ‘members.’  It begins with an analytical critique of these two notions that is meant to be the most comprehensive available to date.  But it further provides a historical critique, showing for the first time where these notions came from and why they were uncritically accepted in England, but not even contemplated in the contemporaneous Dutch Republic, although the Dutch did more to pioneer the business corporation.

This critique of Anglo-American terminology is not just a matter of linguistic hygiene.  The assumption that stockholders ‘own’ the corporation, or at least are its ‘residual claimant,’ is, in the first place, the principal prop of the doctrine of ‘shareholder primacy’—the claim that the stockholders are the ‘principals’ of the corporation and that management is their ‘agent,’ with an obligation to run the firm so as to maximize stockholder financial returns.  Because the average length of stock holding has plummeted over the past two generations, from six years to four months, this doctrine places pressure on management to focus on short-term returns and rapid run-ups in stock price rather than on long-term value creation that benefits all corporate stakeholders.  In the second place, in the United States specifically, the notion that stockholders are the owners and members of the corporation is the principal ground of the corporation’s claim to constitutional rights—that it is not really the corporation’s rights, but those of its stockholders, that are being protected.  Take away these assumptions and the rationale for both shareholder primacy and for corporate constitutional rights collapses, allowing us to rethink the purpose of the corporation and the proper range of its rights.

In its analytical critique of stockholder ownership, the article shows that, even if we split the atom of property into its constituent rights-fragments, none of these are held by the stockholders, either individually or collectively.  Rather, all are held by the corporation itself—that is, by the legal entity that is the corporation in law—and are exercised on its behalf by management.  Specifically, shareholders do not have the right to use, rent out, exclude other from, collateralize, sell, or in any other way control the property.  Nor do they have a right to the ‘residual,’ the profit remaining after all contractual obligations of the firm have been met.  Nor do they have the rights of owners at the dissolution of a corporation, only the rights of heirs.  Nor can they be said to own the legal entity that holds all of these ownership rights.  The legal entity is an unownable owner, like us.  One may own its stock and, under Anglo-American corporate law, thereby gain the right to elect its board members, giving one indirect control.  But the firm’s assets remain those of the legal entity.  The modern multinational is only possible because of this.  If it were possible to own the legal entity, the firm would cease to be a corporation.  Its separate juridical ‘personhood’ would be extinguished, as is that of the chattel slave, and the purchaser would become the sole proprietor of a sole proprietorship.

The analytical critique of stockholder membership proceeds by contrasting two historical forms of corporation—the universitas personarum, which was an incorporation of people primarily and of property secondarily, which I have dubbed the ‘member corporation’; and the universitas rerum, an incorporation of property alone, without members.  The former includes medieval universities, towns, and guilds, whose members were ‘incorporated’ as a ‘body politic.’  This ‘body politic’—an abstract, incorporeal body, as opposed to a body natural—held the institutional property.  But more to the point, these bodies were run as little republics, in which the members controlled the membership, operated on the principle of one-member-one-vote, and elected a government over themselves (a rector or mayor or guild master) that was accountable to them.  These traits of membership are also consonant with the lay understanding of what ‘membership’ means in informal, unincorporated member associations, such as a bridge club.  The property corporation, in contrast, lacked members.  The paradigmatic medieval example was the bishopric, an incorporation of property that the bishop governed as its officer, governing also any of its employees, to whom he was certainly not accountable.

The business corporation is no member corporation.  The stockholders do not control the membership (shares are freely tradable); they operate on the oligarchic principle of one-share-one-vote; and they do not elect a government over themselves, but over others, the employees.  The business corporation is thus authoritarian in structure, like the bishopric, with no accountability of the ruler to the ruled.  Further arguments show why the ‘body politic’ metaphor, which had always been central to English descriptions of member corporations, does not fit the business corporation, and has disappeared.  All of this makes better sense once we distinguish the corporation, understood as a legal entity, from the firm that is organized around it.  There may be some sense of the word ‘member’ that allows us to speak of firms (corporate and non-corporate) as having members—perhaps the employees, for example.  But the business corporation is not a corporate body in the original sense of having ‘members’ who are ‘incorporated’ as a mystically-united body politic.  Stockholders are outsiders who, in the US and UK, normally do not even exist at the point when a corporate charter creates the legal entity and institutes a board that begins running the company.  Stockholders only appear on the scene after shares are issued and sold.  They thus cannot be the incorporators who are incorporated.  No one in the firm is ‘incorporated.’  Only the property is incorporated, to be held by an abstract legal entity.  The business corporation is thus a property corporation without members.