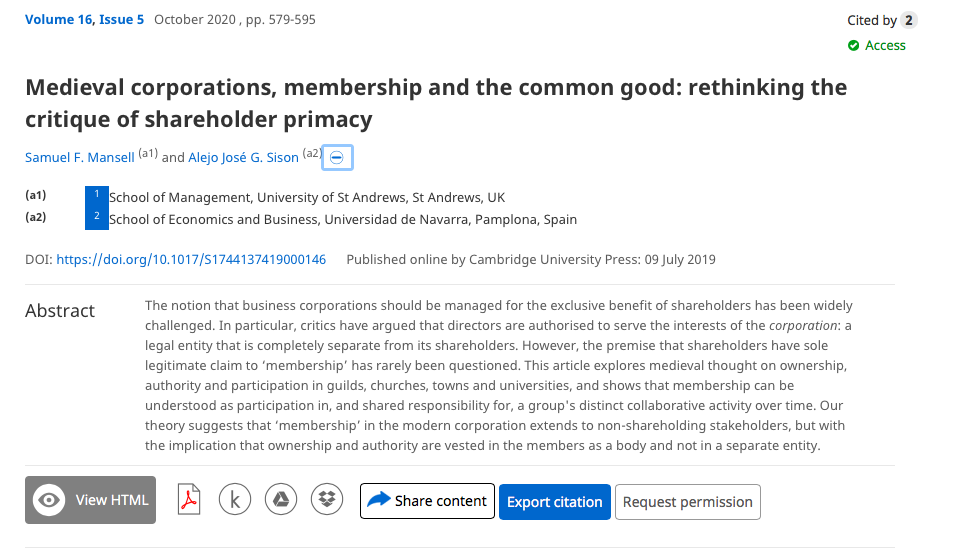 What makes a shareholder a ‘member’ of a corporation, and what are the responsibilities that membership entails? Should shareholders even be considered members at all? And if so, might other stakeholder groups (e.g. employees) also have a legitimate claim to membership? If managers receive their authority from the corporation’s members, then the answers to these questions shape the purposes that managers can legitimately pursue on the corporation’s behalf. The extent to which a corporation’s purpose can encompass the interests of non-shareholding stakeholders would seem to depend on whether such groups should be considered corporate members, and therefore on the criteria for attributing membership status.

Theories of corporate purpose in the business ethics and corporate governance literatures have frequently entailed the rejection of ‘shareholder primacy’ – the view that managers are accountable exclusively for the pursuit of shareholder interests, and (implicitly) that shareholders alone are ‘members’ (Friedman 1970, Jensen and Meckling 1976, Sundaram and Inkpen 2004, Boatright 2006). It is often held that this view misunderstands the relationship between a corporation and its shareholders, because corporate property is owned by the corporation itself rather than by shareholders, and the latter cannot be a ‘principal’ authorising an ‘agent’. These criticisms have been developed extensively in both the business ethics (Boatright 1994, Phillips 2003, Sison and Fontrodona 2013) and progressive corporate law literatures (Ireland 1999, Stout 2012, Robé 2011, Deakin 2012, Chassagnon and Hollandts 2014).

We agree that shareholder primacy can be challenged along these lines. However, we argue that a focus on ownership is inadequate because it targets only the claims of individual shareholders. Inspired by investigation of medieval sources and practices, we argue instead that a corporation can be identified with a body of individuals that its management is authorised to serve. A more persuasive challenge to shareholder primacy is therefore to ask whether the modern business corporation is constituted, at least in part, by non-shareholding members. For as Ciepley (2015: 8-9) observes, besides arguments from property ownership, a further ‘leg’ propping up the ‘stool’ of shareholder primacy is that shareholders alone are ‘members’, “and since it is their club, it should be run in their interest.”

For example, the UK Companies Act 2006 states that a director’s duty is to “promote the success of the company for the benefit of its members as a whole…” (s 172(1)). In a company with share capital the ‘members’ are the shareholders (s 8(1b)) and the corporation is identified with the members (s 16(2)). And Delaware corporation law appears to view ‘member’ and ‘stockholder’ as equivalent terms (General Corporation Law – Delaware Code, § 109(a)). In both cases, a corporation is identified with a body of members which authorises a board of directors to serve its interests: the corporation’s purpose therefore stems from the interests of its membership. One might expect to find a rationale for distinguishing members from non-members both in arguments for shareholder primacy and for stakeholder oriented corporate governance. On either side of this debate, the issue has received little attention.

Arguments concerning membership did emerge, however, in the context of medieval corporations: universities, craft and merchant guilds, villages and towns, collegiate churches and the Roman Catholic Church (Pollock and Maitland 1898, Tierney 1955, Kantorowicz 1957; Gierke 1990, Kempshall 1999, Black, 2003). Between the twelfth and fifteenth centuries, the relationship between a corporation and its members was frequently contested; in the process, connections were forged between concepts that are central to the contemporary debate, but which offer an alternative perspective.

For example, critics of shareholder primacy emphasise the ‘separateness’ of the corporation from its individual participants – a point that follows logically from assumptions about the meaning of ownership and the source of managerial authority. However, in the medieval sources, we find an alternative possibility for how these concepts fit together. Authority and ownership reside in the members as a ‘plurality in succession’ (Kantorowicz, 1957), in which individuals participate through their contribution to a distinct collaborative activity (or ‘common good’). By rethinking the relationship between a corporation and the individuals it comprises, we develop a conceptual framework in which the question of non-shareholding membership can be addressed.

The purpose of our historical analysis is to re-examine the concepts that frame our contemporary understanding of a corporation’s purpose and relationship with its members. This research has the potential to explain how the legal concept of the company (or members) “as a whole” could reflect the interests of all who share responsibility for the company’s common good (Sison and Fontrodona, 2013). For example, in the context of the UK Companies Act, Deeming et al. (2016) have argued that employees who meet a certain threshold (in length of service and hours of work) should have statutory recognition as members of the company and the right to block takeovers recommended by the board. Our concept of the corporation as a succession of members committed to a common good supports the preference for ‘committed shareholders’ (Mayer 2013: 206) and a long-term perspective in equity markets (Kay 2012). There is also potential to extend the critique of short-term shareholder value (see Stout 2015 on the corporation as a ‘time machine’). Although the framework we propose departs in certain respects from recent debate on corporate purpose, it is reinforced by theories of the firm as a real entity (Vanberg 1992, Gindis 2009, Adelstein 2010).

It could be objected that our approach is anachronistic, insofar as there are manifest differences between any medieval corporation and a modern business organisation. However, when critics of shareholder primacy deny that managers are authorised to serve shareholder interests alone, this very objection signifies that the relationship between a corporation and its members is central to the question of corporate purpose. The significance of the medieval arguments, in the present context, is that they offer a different perspective on precisely this relationship.

Gindis, D. 2009. From fictions and aggregates to real entities in the theory of the firm. Journal of Institutional Economics, 5(1): 25-46.

Mayer, C. 2013. Firm Commitment: Why the corporation is failing us and how to restore trust in it. Oxford: Oxford University Press.

Tierney, B. 1955. Foundations of the Conciliar Theory: The Contribution of the Medieval Canonists from Gratian to the Great Schism. Cambridge: Cambridge University Press.