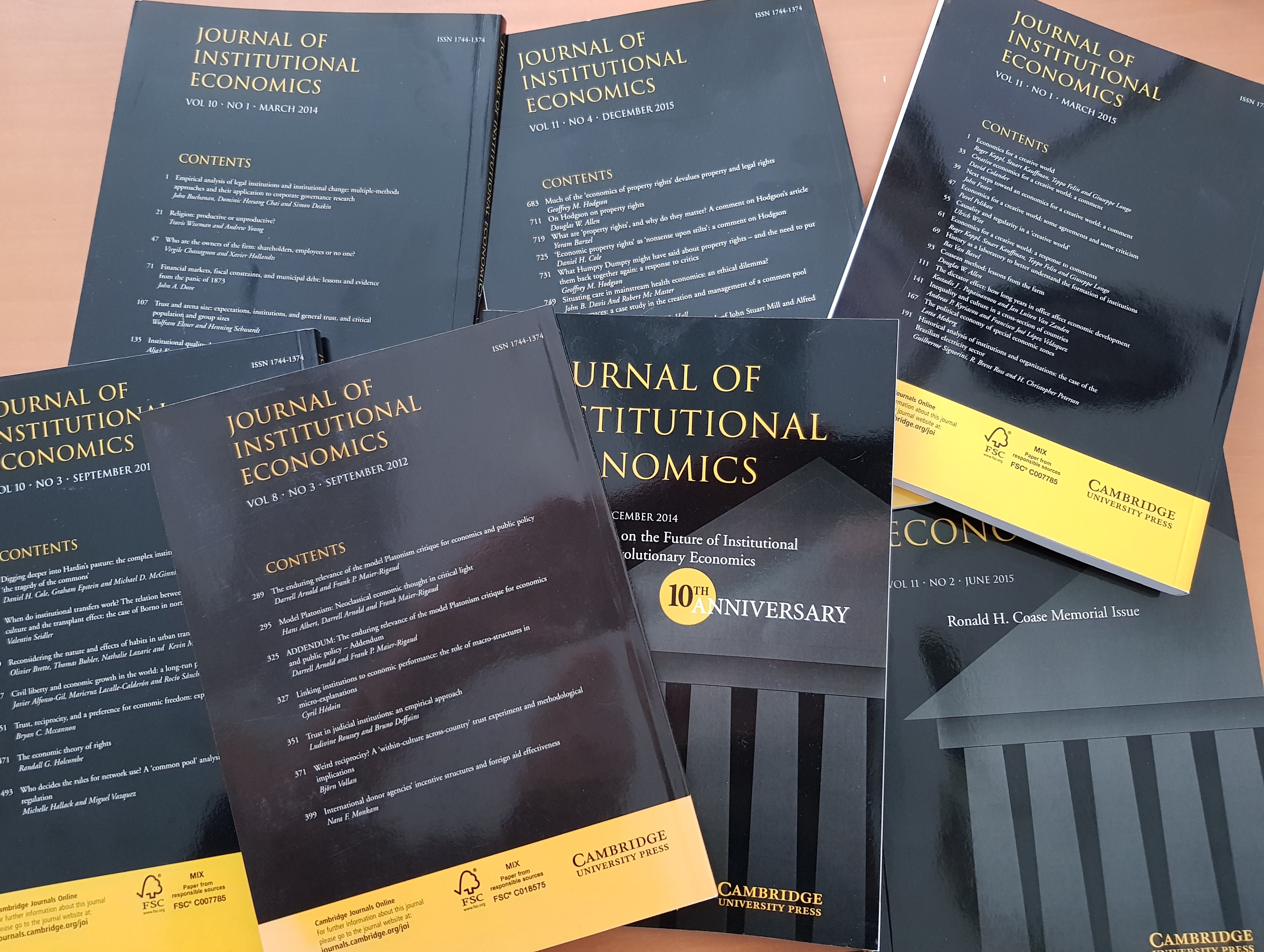 Summary of JOIE article “1688 and All That: Property Rights, the Glorious Revolution and the Rise of British Capitalism”, Journal of Institutional Economics, 13(1), March, pp. 79-107, by Geoffrey Hodgson (Hertfordshire Business School, University of Hertfordshire). The article is open access and available on the JOIE website.

Addressing the growth of British capitalism, Douglass C. North and Barry Weingast (1989) stressed the importance of institutional changes following the Glorious Revolution of 1688. North and Weingast (1989: 803) argued that the development of Britain’s modern economy depended on ‘secure property rights’ and the ‘elimination of confiscatory government’. The constitutional settlement of 1689 between the Crown and Parliament had the effect of  ‘reducing the arbitrary powers of the Crown [and] resulted not only in more secure economic liberties and property rights, but in political liberties and rights as well’ (North and Weingast 1989: 816).

Other institutional economists have adopted similar arguments. Daron Acemoglu, Simon Johnson and James Robinson (2005: 393) suggested that in the English Middle Ages there was a ‘lack of property rights for landowners, merchants and proto-industrialists’ and that their ‘development’ first occurred in the late seventeenth century, when ‘strengthening the property rights of both land and capital owners … spurred a process of financial and commercial expansion.’ They too highlighted the settlement of 1689, which limited the power of the monarch and facilitated ‘the development of property rights’.

But key elements in these arguments have been criticised by historians. While the Glorious Revolution did lead to a change in the de facto balance of power between the monarch and Parliament, this was not a result of any major de jure legislation. Historians have played down the extent of the constitutional settlement of 1689 by stressing its ‘conservative’ nature: it was aimed at the restoration of established rights and it was ‘defensive’ rather than innovative.

Others have pointed out that property rights were already relatively secure before 1688, by 1600 or even earlier. Furthermore, Julian Hoppit (2011) and Sheilagh Ogilvie and André Carus (2014) argued that property was no more secure after the Glorious Revolution: the very fact that Parliament met more often posed greater legislative risks to property. The 1833 British abolition of property in slaves is a dramatic later example of property made insecure.

Whatever the chain of causation, Britain’s industrial development gathered pace much later. As Gregory Clark (1996: 588) put it: ‘Institutionalists were stretching a point when forging the link between the institutional changes of 1688 and the Industrial Revolution beginning in 1760.’

The Nature and Evolution of Property Rights

Before the Industrial Revolution, by far the most important type of wealth was in land. A foremost obstacle to the development of commerce was not the insecurity of property rights, but the feudal nature of landed rights. Long after the decline of classical feudalism in England, enduring and well-defined rights often carried feudal obligations that limited the use of this wealth for investment and constrained the growth of markets, finance and capitalism.

There were enduring restrictions on landed property, known as entails. Many entails enforced primogeniture, ensuring that a landed estate passed from one generation to another through the eldest son. Entails also ‘restricted the uses to which land could be put. … Holders could seldom sell, swap, or mortgage property under their control’ (Bogart and Richardson 2011: 245).

Much additional land was set aside as commons, for the shared use of villagers. At the beginning of the eighteenth century about one-quarter of arable land in England was held as commons (Bogart and Richardson 2011: 247). This common land could not be sold or mortgaged.

These restrictions on the saleability of property were important not simply because they held back the development of English agriculture, which could release labour for growing industry once agricultural productivity increased. In addition, commons, entails and strict settlements greatly inhibited the use of land as collateral for loans, which could be invested in mercantile, industrial and infrastructural ventures.

Barriers to the commodification of land and its use as collateral did not disappear spontaneously or easily. They were defended by strong and enduring vested interests. Entails stubbornly endured, largely because the wealthy elite endorsed them. Owners were disinclined to sell or mortgage buildings or land that had been in their family for generations. Loss of land meant loss of status, influence, titles and privileges.

It took numerous varied Acts of Parliament to remove these restrictions, lasting well into the nineteenth century. Enclosure acts removed grazing and other rights from the commons and placed the land in the land in the hands of a single owner. Estate acts undid strict settlements and statutory authority acts were used to develop infrastructure, including improvements to roads, rivers and the construction of canals (and later railways).

In sum, to enable the rise of capitalism, a major problem with older property rights was not their insecurity, but their entangled, feudal nature. In particular, the property rights of an heir to his father’s estate prevented the sale of such property or its use as collateral for loans. In a sense, the problem was not that there were too few property rights, but too many.

Strong vested interests protected the feudal nature of landed property rights. These vested interests were not immediately diminished by the events of 1688-89. Major institutional changes were required to provide incentives for the commercialization of land and to enhance a money-making culture, over and above matters of status based on landed property. A major problem was to reform well-established and secure property rights, not to establish them. Furthermore, the evidence suggests that the more dramatic changes in the nature of property rights came after 1750 (Bogart and Richardson 2011).

1688 led to Wars that prompted the Financial and Administrative Revolutions

An immediate effect of the Glorious Revolution was the renewal of war. Before 1688 Britain was allied with France and Spain against the Netherlands. After 1688 Britain and the Netherlands became allies, against France and Spain. The Nine Years’ War (1688-97) was quickly followed by the long War of Spanish Succession (1701-13). There were also the Jacobite Rebellions of 1715 and 1745. There was the War of the Quadruple Alliance (1718-1720), the Anglo-Spanish War (1727-1729), the War of the Austrian Succession (1740-1748) and the global Seven Years’ War of (1756-1763). Overall, Britain was plunged into a long period of war, requiring major reform of its fiscal and administrative arrangements.

The invasion of 1688 led to an influx of Dutch merchants and financiers, who brought knowledge of Dutch financial institutions and helped establish London as the world’s leading financial centre (Dickson 1967). The institutional infrastructure of British finance was revolutionized.

The establishment of the Bank of England in 1694 was prompted by the need to finance war abroad. It was part of a chain of institutional events that led to the development of a modern financial system in Britain, with the crucial role of the state in gathering taxes, issuing bonds and loans, buttressing private banks, and acting as lender of last resort.

The needs of war and the combined pressures of global and domestic commerce were major forces behind the development and reform of financial institutions and state administration (O’Brien 2011). As Henry G. Roseveare (1991: 4) pointed out, accompanying the political and fiscal changes after 1688 there was ‘an administrative revolution – or, at least, a striking growth in the power and effectiveness of the state which manifested itself not merely in war but in the subtler tasks of peace.’

The state administration established a stronger fiscal base and empowered a growth in tax revenues, particularly to finance wars. The settlement of 1689 strengthened the political consensus, creating the foundation of an effective fiscal state (Roseveare 1991). The major part of state revenue was through customs and excise charges, which increased with the growth of Britain’s power and trade abroad (Mathias 1983: 428). Ironically, the most obvious and immediate effects of 1688 were not a growth in free enterprise, but a considerable expansion in state bureaucracy and taxation.

The Financial Revolution involved several legislative steps, including changes to laws concerning usury and the sale of debt, and the development of new organizational structures and business habits. Addressing the evolution of finance in Italy, the Netherlands and Britain, Geoffrey Ingham (2008: 70) concluded that ‘the capitalist monetary system developed from the integration of private networks of mercantile trade credit-money with public currency – that is, state money.’ For Ingham (2008: 74) and others, crucial to this system was the role of debt:  ‘Capitalism is distinctive in that it contains a social mechanism by which privately contracted debtor-creditor relations … are routinely monetized.’

Capitalist Finance and the Transformation of Property Rights

Capitalist finance involves a complex web of contractual obligations. Commercial banks since the fourteenth century operated increasingly by keeping only a fraction of their deposits in reserve as cash or gold. Any debt is funded by current assets, or by claims owed by a third party. The purchaser of debt receives the right to an asset that itself can be used as collateral to borrow. Credit money thus feeds on itself: commercial bank money is created endogenously (Moore 1988, Wray 2012). With such arrangements, banks can create more money ‘out of nothing’ (Schumpeter 1934: 73). After 1688 a modern financial system developed, which rested on the pillars of collateralizable property, negotiable debt, global trade, and state power.

The evolution of the financial system in the first half of the eighteenth century facilitated more and more industrial and infrastructural projects based on large-scale borrowing. As the profitability of larger-scale investments was demonstrated, wealthy landowners and other investors were enticed by further commercial ventures. Growing opportunities for profit eroded longstanding, sentimental, family commitments to their estates. This impelled the removal of entails, so that land could be used as collateral for loans. Hence the major capitalist reforms to property rights in land followed rather than preceded the Financial Revolution.

This account puts the growth of finance at the centre in the explanation of the rise of capitalism. While secure property rights, trade and wage labour may be taken as necessary features of capitalism, they are insufficient to define that system. At the core of capitalism – as it emerged in the eighteenth century – is a set of financial institutions based on collateralizable property and credit creation. These institutions and the financial system are typically buttressed by the state (Ingham 2008, Hodgson 2015a).

As Joseph Schumpeter (1939: 223) pointed out, ‘capitalism is that form of private property economy in which innovations are carried out by means of borrowed money, which in general … implies credit creation.’ Money is borrowed on the basis of collateral. Yet this aspect of property is neglected in much of the ‘economics of property rights’, which concentrates instead on property in terms of control (Heinsohn and Steiger 2013, Hodgson 2015a, 2015b). Schumpeter (1954: 78 n.) also emphasized ‘the importance of the financial complement of capitalist production and trade’. Hence ‘the development of the law and the practice of negotiable paper and of “created” deposits afford perhaps the best indication we have for dating the rise of capitalism.’

If this analysis applies to the development of capitalism in countries beyond Britain, then it would suggest that the building of a state administration, which can sustain a modern monetary system and secure the use of private property as collateral, is an important precondition of rapid economic growth. Hence a stress on the ‘security of property rights’ would be insufficient in developing countries. The nature of property, and its connection with finance and politics, have to be better understood.

O’Brien, Patrick K. (2011) ‘The Nature and Historical Evolution of an Exceptional Fiscal State and its Possible Significance for the Precocious Commercialization and Industrialization of the British Economy from Cromwell to Nelson’, Economic History Review, 64(2), May, pp. 408-446.