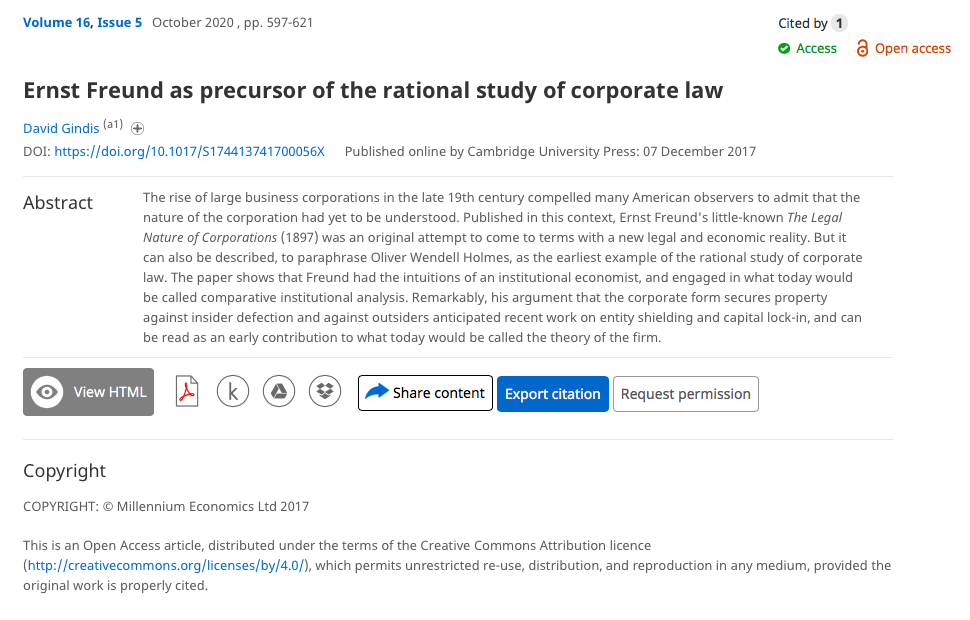 Summary of JOIE article (First View, 07 December 2017) by David Gindis, Senior Lecturer in Economics, University of Hertfordshire. This article appeared in the Symposium on Corporations edited by David Gindis.The complete article is available on the JOIE website.

Until recently, the legal personality or legal entity status ascribed by law to firms and similar organization played little or no role in the theory of the firm or the economic analysis of corporate law. It was indeed commonplace to dismiss legal personality or any talk of corporate rights and duties, as distinct from the rights and duties of the individuals involved, as a convenient legal fiction that inevitably led to worrying reification (Jensen & Meckling, 1976; Easterbrook & Fischel, 1991). By contrast, the idea that legal entity status fulfils important economic functions overlooked in previous research features prominently in more recent scholarship on the firm (Blair and Stout, 1999; Hansmann & Kraakman, 2000; Blair, 2003; Hansmann, Kraakman & Squire, 2006; Gindis, 2016; Deakin et al., 2017).

This new scholarship shows that while all types of firm exhibit some degree of separation between the firm’s business assets and the personal assets of its founders, directors or shareholders, the degree of separation achieved by corporations is significantly stronger than that characteristic of partnerships. Corporate assets are controlled by an independent board and are literally locked-in, in the sense that neither firm founders nor subsequent shareholders can withdraw all or part of their equity share or force a partial liquidation to satisfy the claims of their personal creditors. This institutional arrangement, which cannot be achieved by contract alone, helps address various collective action and commitment problems, and fosters specific investments which enhance the joint surplus value.

In this paper, I show that an early statement of these ideas can be found in The Legal Nature of Corporations, a little-known book published in 1897 by Ernst Freund, one of the originators of the University of Chicago Law School’s distinctive interdisciplinary curriculum (Mordfin & Nagorsky, 2011). Some historians of American corporate law have identified Freund as an important theorist and have characterized his book as a brilliant exposition of the theoretical underpinnings of corporation law that was well ahead of its time (Horwitz, 1985; Mark, 1987; Millon, 1990; Reitz, 1993; Carrington, 1994; Harris, 2006). Yet to date references to Legal Nature of Corporations remain very rare, and a systematic assessment of its contributions remains unavailable. I propose the first such assessment in this paper.

Although it was written at a time when the rise of large business corporations compelled many leading American lawyers and economists to admit that the nature of the corporation had yet to be understood, I argue that Freund’s book was more than just an original attempt to come to terms with a new legal and economic reality. While his fellow law professors relied exclusively on case law and authorities from the past, Freund engaged in what might be called the “rational study of corporate law,” namely the study of the ends sought by corporate law and the reasons for desiring them (to paraphrase Holmes, 1897). In the process, he formulated what arguably was the first modern theory of the corporation.

The generalization of incorporation by simple registration in the decades preceding the publication of Legal Nature of Corporations had weakened the previously unquestioned view that corporations were creatures of the state. In the 1880s, as the existence and actions of corporations came to be understood as products of private rights and freedom of contract, many influential observers, including Victor Morawetz, the author of the decade’s hit corporate law textbook, claimed that corporations were not very different from partnerships: corporate rights and duties, particularly as related to property, were in reality the rights and duties of a corporation’s stockholders.

Freund took issue with this view. Not only did it fail to explain why individuals forming a business association would choose the corporate form over the partnership, it also ignored the indisputable fact that law treated corporations as holders of rights and duties that are entirely distinct from any of the individuals involved. Contrary to Otto von Gierke and others in Continental Europe, Freund did not accept the idea that a corporation held rights because it had a will of its own. Metaphysical speculation of this kind was unnecessary. The twin questions of the legal nature and desirability of the corporation could be tackled by focusing on the practical requirements of property law.

Freund reasoned that a key problem faced by business associates pooling their resources together in the hope of superior gains was how to safeguard their mutually beneficial interest in the face of disagreements and other failures of cooperation. The consequences of dissent were greatest in forms of association where control was jointly exercised and concurrent action was necessary, but even when neither was strictly required because representatives had been nominated and a majority decision rule adopted, the problem of internal defection remained. To be truly protected from this threat, associations had to exercise control over the combined resources in a manner that ensured the continuity of the tie binding remaining and incoming members together.

Freund compared the main legal forms of association available at the time from this perspective. Since partnerships were unable to ensure undivided control over the combined resources, they were constantly subject to the possibility of breakup or dissolution. On the other hand, incorporation vested ownership of the combined resources in the legal entity, and attributed unified control over corporate property to a board whose binding powers could survive changes in the association’s membership. This was the safest way to safeguard the association’s continuity through time, and also the best way to secure transactions with outside parties. This, therefore, was the primary reason for choosing the corporate form over the partnership or other forms of collective holding of property.

The board’s position was such that it was easy to attribute actions to the corporation without resorting to dubious theories about the corporation’s supra-individual acting capacity. Corporate actions occurred vicariously in and through specific individuals in specific corporate positions. This was true in cases where boards enforced the corporation’s rights in court. And it remained true in cases where courts deemed corporate defendants liable for torts, nuisances and non-compliance with regulation. Freund did not dwell on this last point, and in fact had turned his attention to administrative law by the time the issue of corporate liability, including in criminal prosecutions, became a hot topic in early years of the 20th century.

Overall, while Freund’s analysis was rudimentary by today’s standards, it seems that he had an intuitive understanding of comparative institutional analysis. It is fair to say that Legal Nature of Corporations provided the first modern explanation of and justification for the separation of ownership and control, and anticipated by about a century recent scholarship on firms and similar organizations. Sadly, partly because Freund’s decidedly analytical approach stood in such sharp contrast with the scholarly habits of his fellow academic lawyers, and partly because Freund himself quickly turned to other matters and never revisited the topic of corporate theory, Legal Nature of Corporations was quickly forgotten. One can only wonder what course the literature on corporations might have taken had Freund remained an active player in the field.